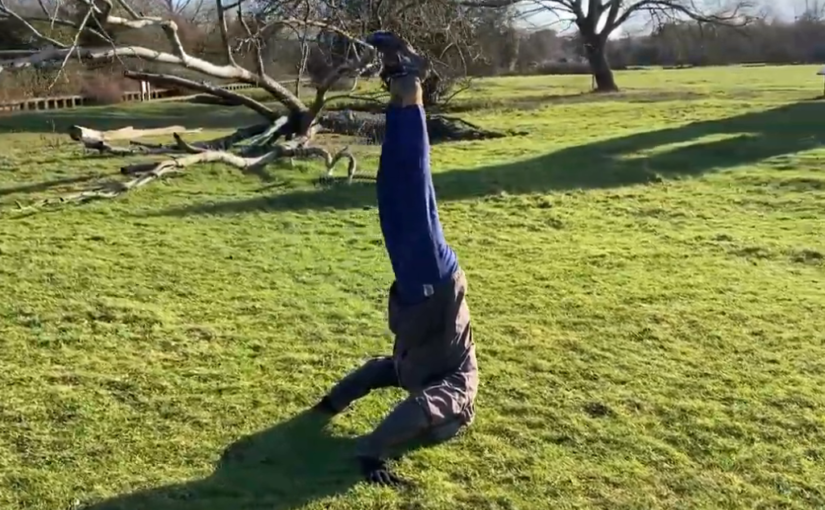 Oxford City Council (as Dancin’ Oxford) asked for contributions to its Spring Awakening project. Dancers contribute video clips of themselves dancing which are edited into a final film for digital distribution. A headstand seemed to summon-up the period in which we were living – the world turned upside down by Coronavirus!

Dancin’ Oxford will be commissioning a global montage dance film that features and captures the energy, dynamism and spirit of the dance community here in Oxford and in our twin cities. It will be a true celebration of the vibrancy and variety of cultures around the globe …

The theme is ‘Spring Awakening’ and this time we would like you to film OUTSIDE. We would like videos of you dancing outside in somewhere local, meaningful, or inspirational to you. This could be a park, a garden, an urban city location, a special natural landscape – anywhere that would be interesting for viewers to see the wide variety of locations around the world that participants are from.

A headstand is a simple movement – stationary and without travelling. I also wanted to inject humour into it. A headstand movement leading to an inverted figure with legs held vertical and straight. Then releasing legs until they were akimbo (out to the side) while remaining upside down seemed perfect. As Boris Johnson, Prime Minister might have said ‘The crocus of hope is poking through the frost‘!

The dance was filmed on a beautiful winters day – 10 February – with bright sunshine but frost and ice lying on the ground. At the time, we were still in a coronavirus lock-down which meant solo dancing. The setting of the dance was the ruins of Godstow Abbey, near Wolvercote, Oxford. Fiona Bennett shot the sequence in a single take with no editing – Dogme 95 style.

I decided to tag the sequence as #HeadstandChallenge for social media – Facebook, You Tube and the like. These are the films tagged with #headstandchallenge on You Tube.

I had already proposed this headstand motif in the dance Spring Awakening (triptych) for a commission by the the Old Fire Station, Oxford although that was more embellished in its staging.

In this dance, I start in a squatted position kneeling on the ground with my chest touching my knees. Then I make a triangle with my head and two hands on the ground, and walk my pelvis up to vertical. Thus when inverted then initially, my legs are folded against my chest and I raise them by unfolding them until straight. Simple – it’s the classic headstand technique.

But coming down from the inversion when my legs are akimbo then I use a different technique to going up. In fact, once my legs go akimbo from vertical then I start to contra-balance.

You can see what this means in the diagram below. Since there is contra-balancing then it’s very comfortable holding the legs out straight (horizontally) in a stable stance. To maintain and initiate the contra-balance then I roll on my head so that I’m no longer contacting the crown of my head on the ground. Coming down is less about folding and unfolding the legs, and more about changing the pivot location on my head and re-balancing my mass – notably my feet and legs counter weighting my pelvis.

Above is the final film from Danc’in Oxford. It’s something of a roll-call for dance groups in Oxford and everyone is featured albeit for a short time.

The previous year, the City Council had a similar call for contributions to its Global Dance Film which was produced for Oxford’s Christmas Light Festival 2020. Footage of the #becommingentleness dance by Oxford Contact Dance was used. Once again, it was filmed by Fiona Bennett. There were also coronavirus restrictions in place at that time.

The featured image above is taken from Fiona Bennett’s film.