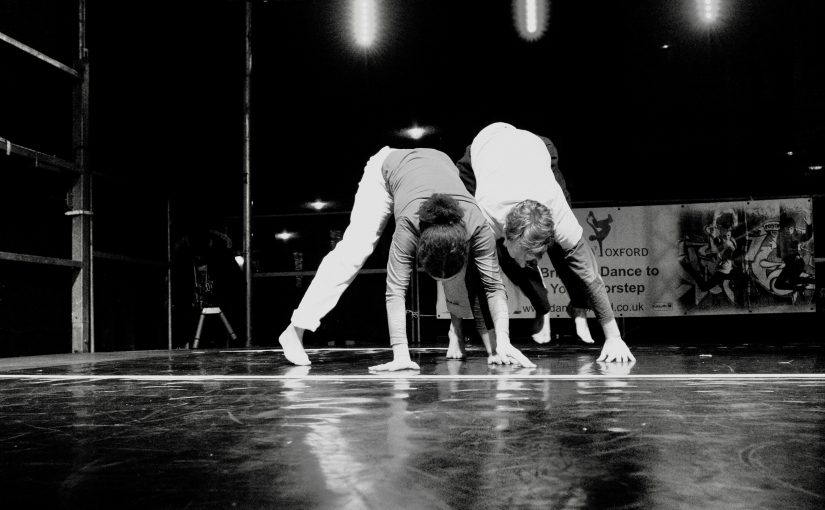 On Saturday 16 November, dancer Jo Dyer, cellist Josie Webber and I, took to the stage in Oxford at the Christmas Lights Festival. We performed a revised version of the ‘In-between’ dance created earlier in the year.

Prior to the public performance we met twice – once at a composition workshop and another for a rehearsal: three hours in total. At the composition workshop, we amended the ‘in-between’ score used at the Turrill Sculpture Garden earlier in the year.

The Christmas Lights performance was only 8 minutes and we had one cellist this time instead of two. You can read the amended score (PDF).

It was quite a peculiar experience dancing on the Christmas Lights stage, and the performance was the first time we’d set foot on it. There was the stark brightness of the lighting and yet the darkness of the set at night, with its black coloured flooring and interior, etc. That seemed to make it smaller although we measured out a similar sized space (7m x 6m) when rehearsing elsewhere.

We’d decided to add a political layer to our dance. I wore a t-shirt with ‘Freedom of Movement’ emblazened upon it, and Jo wore one saying ‘We are all immigrants’. It seemed appropriate for a dance called ‘In-between’, and given the political debate in the UK at this time, seemed wholly necessary. Possibly, the audience couldn’t see the wording on our t-shirts, and the relative lightness and darkness of our apparel was all that could be seen. The blending of lightness and darkness in our clothing, revealing news shapes and forms was part of our intention.

On the night, the temperature was only 6 degrees centigrade and there was a very tight schedule of other dances: it was almost an extreme sport!

Andrew Bell took photos of our performance on the Christmas Lights Stage which you can see below. He’d also taken photos at the in-between performance in the Turrill Sculpture Garden earlier in the year. Thank-you Andrew.