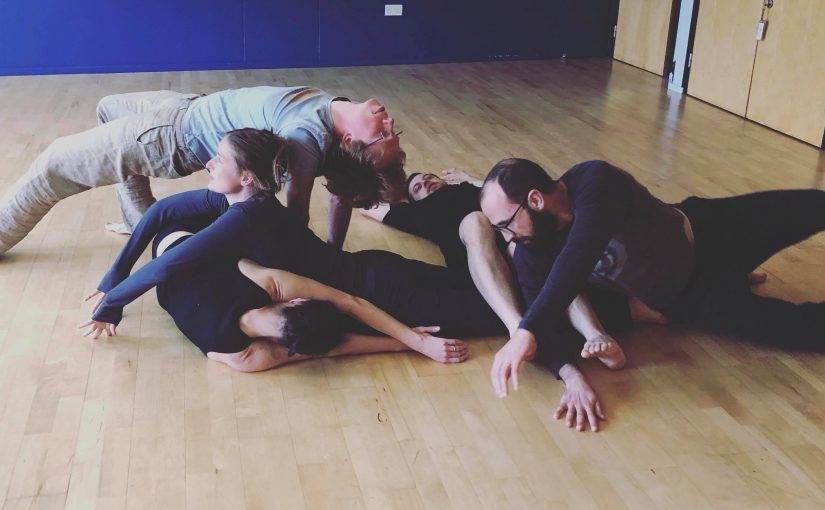 Yoga into Dance was a two hour class led by me and Ashka from Ashka Zasada Yoga on 13 October at Oxford Contact Dance. Afterwards, I pondered our use of narratives in the session.

It seemed simple enough, dance sessions/classes usually include preparation for dancing: warm-up exercises, bodywork or material from Feldenkrais Method, Alexander Technique or something similar. Why not yoga? It’s a somatic technique. Indeed, yoga is like dance – it’s movement but with little or no travel across the floor. Hey, stay on your yoga mat!

You can read the complete schedule of exercises in the class plan (PDF).

When Ashka opened the class then we sat, closed our eyes and brought our attention to our breathing. Here’s two narratives which we carried through the session: sensing without seeing, and attention to breath. Ashka’s yoga practice included plank, down-dog and other yoga positions which will be familiar to all yoga practitioners.

Our transition to dance was via acro yoga or acrobatic balance as it’s also known. This allowed us to retain the use of a mat, and mats matter in yoga! Of the group of nine people then four of us knew acro yoga which also helps with the transition too: it’s a familiar bridge and there’s peer learning too.

But this acro yoga also introduced contact with others – incidentally but which feels quite natural. Yoga is an individual practice – and which is led in a class setting. Acro yoga involves partner working and contact which is essential to the practice of contact improvisation.

One interesting aspect of acro yoga is that it introduces falling, and indeed significant body tone. When we base in acro yoga – by lying on our back and supporting the flyer with our feet, we catch them as they fall. The flyer learns body tone – for essentially, they’re planking while being suspended. They fall onto the feet of the base who lifts, balances and suspends them. We also learn to give our weight – all of it – in this exercise, and to receive it too: we could say it’s weight sharing. Thus important and common somatic elements of dance and yoga are brought into play and merged. We added these two elements to the narrative: falling and body tone.

A more dynamic form of acro balance is where the base actively pushes the flyer away. It’s actually a throw but a throw with the feet. Coming after the acro yoga then it emphasises movement rather than poise. It means the falling is adhoc and more ‘dancey’ thus continuing our transition into dance. I must credit Maga Radlowska – Judd for this exercise, and you can see her demonstrating it in this video below.

‘Now, we’re going to throw aside our yoga mats; let’s set ourselves free!’ I say. The group of nine divides into two. One group is an audience which witnesses the other, who are ‘performing’. The performers enter the space – one at a time – and form a frieze (static ensemble) with others, touching them in some way with their body – it could be hands but equally, any other part will do. The other performers hold their stance and eventually, all of the performers are in the frieze. The ‘audience’ decides when the performance is over – that is the last person has added to the jigsaw of bodies, by clapping. Thus contact becomes more adhoc than acro yoga, hastening our transition to dance.

Finally, we properly transition to dance with leading and following exercises. Note: it’s about leading movement.

People work with a partner – a duet. Both are standing and moving on their feet. They have contact at the shoulder and back. The leader keeps their eyes open and moves to travel with their partner – whose eyes are closed, and who maintains contact, moving across the space. Thus we reinforce the narrative of sensing without seeing – and indeed moving by sensing.

There is a very obvious way in which a narrative is reinforced: we simply say it and point it out, repeatedly!

For example, at one point in this class, I demonstrate a way of coming into contact with a person’s back. We are learning that contact can happen outside of touching with hands. I am standing – feet on the ground, I put my hands on the ground too – bent over, and I say: look – I am in down-dog [stance], and then my pelvis contacts with the back of my dance partner.

Similarly, in another exercise that involves leading and following then we work with partners. One of them lies on the ground face down. I say to the class: put your hands onto the back of your partner and feel their breathing.

We use the technique of confluence, to bring the practice of yoga and contact improvisation together. Ashka has a singing bowel which she plays during the leading and following exercises. It heightens the experience of sensing without seeing. Introducing the singing bowel to the class, Ashka says that in dance sessions (jams) for contact improvisation – we often have a improvising musician too (and she is the improvising musician here).

Finally, the class is closed and Ashka repeats the opening exercise where we sit and bring attention to our breath. We started with a focus on breath and we end with it too.