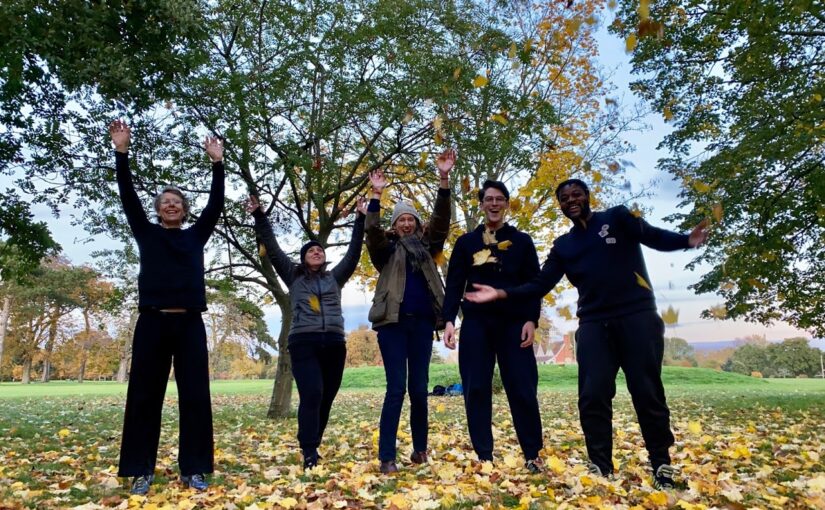 When I began teaching and facilitating dancing with sticks, I draw on my experience of contact improvisation but quickly found it wasn’t enough. I needed new concepts. A movement practice with sticks, has its own semiotics (meanings) and its own physics.

Due to the COVD-19 pandemic, we needed to dance outside and with a one metre plus distance between dancers. Contact with sticks – about a metre in length – seemed a way forward now that contact between bodies was forbidden.

Naturally, I considered that the basic elements of contact improvisation could be retained. Sticks held in the hands could contact each other, they could be slid and rolled, and weight cold be given or taken through them. However, dancing with sticks like this, is difficult – not least because the centre of gravity of the dancers is much further apart: the dancing bodies are always at least one metre apart and getting above and over the other dancer is almost impossible. The sticks also bend and they could snap.

There are already many movement practices which use sticks and which people use as points of reference.

Sticks are used in sports: hockey, snooker, croquet, and cricket to name a few. Sticks can also been seen as weapons – like swords or fighting sticks of one sort or another. This is both an advantage and a disadvantage in creating a new movement practice! There already exists a semiotic of sticks. Even to say ‘dancing with sticks’ rather than ‘playing with sticks’ or ‘fighting with sticks’ infers an established semiotics: the movement itself – its context – sets the meaning.

Sometimes, sticks are extensions of the human body – the arms and hands in particular: stick-as-limb. A hockey-stick extends the arm to the ground while also being a hammer to strike a ball for example. A stick as a sword – is an extension of the arm but with a lethal edge. This analogy is particularly gripping in the imagination. Also, no one who holds a stick as a weapon would give it up: that is counter-intuitive.

There is another way to think of a stick. That is, as an artefact to be shared – to be passed between dancers. In this sense, it is like the ball in football or hockey, etc. So thinking about the stick as an artefact gives rise to new ways of using it. More importantly though, all dancers must know this otherwise they cannot dance together with a stick-as-artefact. Imagine a game where not all the players knew the rules … although people do learn and create conventions when left to improvise in a non-verbal dialogue.

There are also physical properties of sticks which seem to suggest how we should use them: they are rigid and straight; and they have no softness. If a stick is seen as a sword then drawing it over the body of another dancer is counter-intuitive.

Clearly, to arrive at new ways of dancing requires exercising imagination and indeed being counter-intuitive.

Feeling frustrated at using sticks as a substitution for bodies when dancing contact improvisation, I came upon another idea: practice gentleness with them! Just as there are different qualities of touch when having contact between bodies, we can also have different qualities of touch with sticks. We can draw a stick over the body of a dance partner, gently. It doesn’t have to be used to strike – as a weapon. It could be the gentle touch of a lover too. When a stick is used in this way – it becomes soft – bending to the contours of the body’s landscape. The person moving the stick over the body of their dance partner, must move. They must move on their feet, and may change their height off the ground (their level) in order to draw the stick on the surface of their dance partner.

When you consider a stick and its shape then its edge is actually a continuous surface, and in that sense it is also the surface of a plane – rotated about an axis to give a cylinder – which we call a pole or stick. When we move on the floor – rolling upon it with our body then we are a cylinder moving over a plane. But with a stick, it is a cylinder moving over the plane of our body. It is equivalent.

There is another element of dance which we can retain when dancing with sticks: leading and following. Does the stick follow a dancer which it touches; or is the dancer lead by a stick which touches them? And remember – there is always another person holding the stick!

I described two ways of thinking about stick dancing: firstly, a stick is an extension to the body; secondly, an artefact between dancers. There is a third: sticks can be seen as relations between people.

This idea of the sticks as relations between people says something about the stick – the sticks are between people! Or rather, the stick is between dance partners. But the person holding the stick isn’t necessary leading in the dance- as we discussed above. A duet with a stick can involve only one person holding a stick; it could involve handing the stick between dancers; and of course both dancers can hold the stick too. Thus a duet where both dancers hold the stick, can contra-balance if they both lean out for example.

Looking at the composition session of our dance ‘Becoming Gentleness’ below (edited), see if you can decide which of the three semiotics describe above, are manifested as the dance progresses. The full score of the dance is show here.

Photos and filming by Fiona Bennett. Featured photo and other photos: Portrait of dancers and film-maker after the performance of the Becoming Gentleness dance on 23 October 2020.