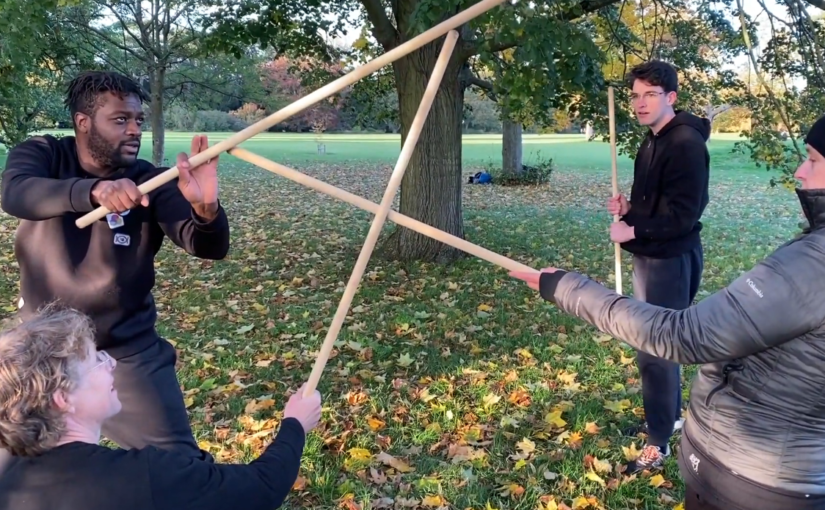 I’m very proud that despite a global pandemic, we still managed to create a new dance – ‘Becoming Gentleness’ – at Oxford Contact Dance. We danced with sticks – outdoors – in University Parks, Oxford on 23 October 2020. There was a beautiful sunset and a carpet of autumn leaves.

There were four dancers – a quartet. One of us who’d been isolating as a precaution against COVID-19 was now all clear. We used a score that we’d developed at the composition session, the previous week. There were some impromptu additions – the thumping of sticks on the ground and against each other, and drawing sticks through the fallen leaves in circles, throwing them up.

Here and back again!

When I restarted Dance in the Park this September, a man from Reading – Aundre, attended the sessions. It was a huge affirmation for me: to travel so far – an hours bus ride – for Dance in the Park! Amazing!

An important part of the sessions was the use of sticks to dance with each other and to contact-through thus meeting regulations for COVID-19. It wasn’t totally alien to me as a couple of years ago, we’d devised a dance using sticks called The Garden Dance But this was was different as we had to be physically distanced with at least one metre between the dancers.

In the score for Becoming Gentleness, there was a late addition entitled ‘Aundre’s surprise’. It involved the dancers linking arms with sticks held between them while another dancer moved within the ring of dancers and sticks, contacting the sticks with a low body tone ie limpness, back and forth. The idea of this technique came from Andre’s students in Reading, and it had returned to Oxford with him, to be used in the Becoming Gentleness dance. In other words, the practice had been adapted and changed but then returned to Oxford. What a wonderful thing!

‘Aundre’s surprise’ complements another exercise from Dance in the Park which teaches high body tone. Here, a person rocks back on their heels and they’re caught by two sticks held across their back. It’s a trust game. Prior to COVID then sticks wouldn’t be used but hands catching.

New movement practices have often come from unusual circumstances. For example, Capoeira which was developed by people held as slaves in Brazil. They were forbidden from fighting, and so they developed movement skills in a dance which were similar but not fighting!

We have unusual circumstances in a pandemic and developed our movement practices. We could become much more fluid in our movements – if we practice. Perhaps then we’d have something between a martial art, baton twirling, contact improvisation and improvised dance? We just need a new name for it … have you any suggestions?

The featured image (above) and the film were created by Fiona Bennett.

Other articles about the Becoming Gentleness dance