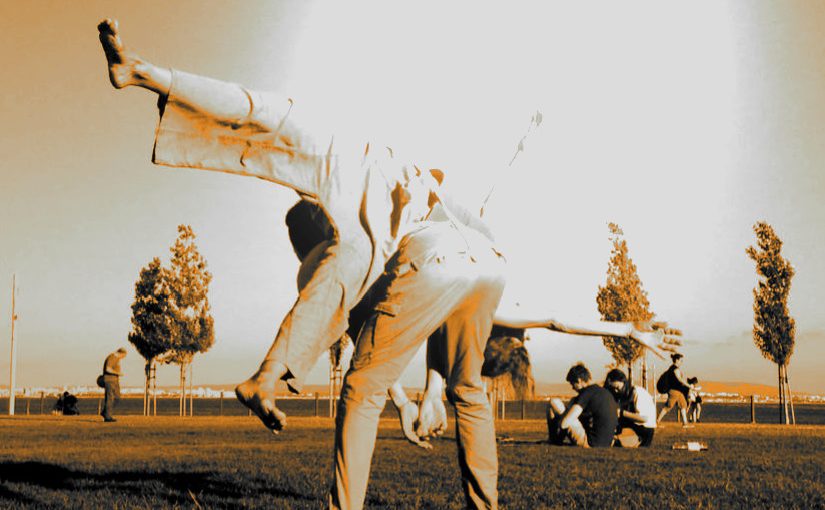 Sometimes, compliments come in the most oblique ways: ‘Are you dancing?’ said the man in the park at the end of our outdoor dance session in Oxford called Dance in the Park.

I started Dance in the Park in June 2015, and it’s now in it’s third year.  We – Oxford Contact Dance – dance contact improvisation in University Parks, Oxford. There’s also a class or introductory session depending on who turns up. It’s at the mercy of the weather. In June, it often rains and its cancelled or at least – no one turns up! Since this is University Parks then selling anything is forbidden and hence we can’t charge but equally, it’s nice not to charge too. Recorded music is forbidden in the park although acoustic is permitted. For other dances which rely on it then this might be the kiss of death but not for contact improvisation, and usually we have no musical accompaniment. University Parks has also been a regular venue for acro yoga in Oxford so we’re not alone in our use of this public space.

Dancing outside in the summer is great and there are the sights and sounds of the outdoors. One time, I recall the exquisite scent of pine from trees near to our dancing. There’s lots of trees in University Parks and it’s beautifully maintained. The summer evenings are often welcome rest-bite from the heat of the day. The sky is visible too of course, and the park is open until dusk so the setting sun can be seen.

Dance in the Park is a drop-in event and the number of people attending varies alot. One time, there were 18 people – largely due to summer school students attending it. But most of the time there’s probably five people – sometimes more and sometimes less. Oxford is a small city with about 165,000 inhabitants, and many of those are connected with the universities which revolve around their academic years. Hence, summer is often holiday time or time away from Oxford. Someone once described Dance in the Park as a ‘loss leader’. I’d not considered it in these marketing terms but it’s true that a few attendees also come to our other classes later in the year which are charged. Equally though, if few people attend the event then we don’t lose money on venue hire as there is none for using a public place like the park.