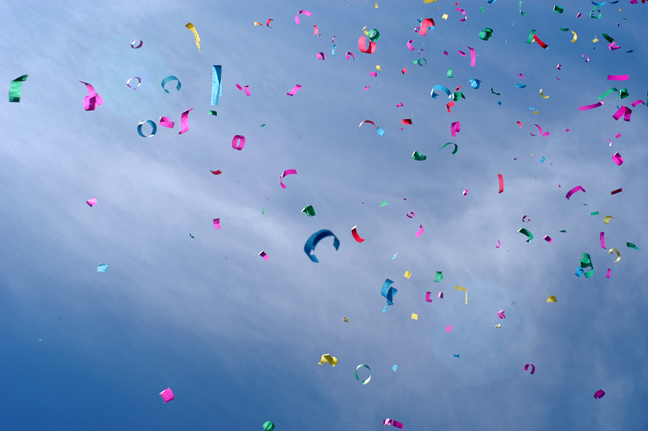 This dance theatre composition ‘Dissidence’, uses techniques from contact improvisation. It’s intended for performance at a fringe festival or in an art gallery, or similar setting.

(Noun) Disagreement, as of opinion or belief; dissent. (Noun) Difference or separation in opinion; disagreement; dissent.

From The American Heritage® Dictionary of the English Language, 5th Edition.

This dance composition uses dissidence in contrasting two seemingly disjunct feelings or activities in a dance. The contrasting elements are humorous and thought provoking. This dance is for eight dancers and it also involves audience participation.

Inspiration for this piece included: seeing confetti showered on newly weds at Westminster Hall registry office, London; the sound of leaf blowers in autumn of 2019; and my own dance practice in London and Oxford.

Two dancers, walk forward spiralling into meeting each other at the centre of the space. As they walk, they leave a trail of confetti on the floor. When meeting they duet.

As the dancers duet, there is the sound of leaf blowers off-stage. Four dancers with leaf blowers enter either side, and proceed to blow the confetti into a storm about the dancing duet.

The four dancers with leaf blowers put them aside. They attempt to dance with the duet, trying to separate them. Eventually, they succeed and we have two dancing trios. But then two of the dancers in each trio separate, giving two duets and two dancers with no one to dance with. Standing, they look around and see each other. The two standing dancers move toward each other and duet. Hence there are now three dancing duets. It seems that the duet form cannot be defeated!

Two of the duets join to form a quartet. Suddenly, they realise that not all the dancers are dancing together: two are missing. The quartet then stops and looks at the remaining two dancers who are … duetting! The circle is closed, as at the beginning – there was a duet and four onlookers – who were using leaf blowers, and now – at the end – there is a duet and four onlookers, once again!!

All the dancers stiffen and face the same direction. They stand erect for the duration of the anthem. As they stand, members of the audience who have been given brushes, dust pan and brushes, sweep and clear the confetti from the stage as soon as they can. They start at one side of the stage, and travel across the stage – roughly in a line, until they reach the other side, having cleared it.

The anthem and cleansing are finished.

The six dancers embrace a partner and dance a tango.

The word “hide” is shouted. The six dancers form three tables – it’s an acro-balance where each couple can recline resting on the outstretched leg of their partner – hence six people form three ‘tables’.

Once there are three ‘tables’ then each of the tables has a chequered table cloth laid upon them. The edge of this is just under the chin of each dancer who is able to look up and across ‘the table’ to their partner. Almost as if their head has come to dinner but not the rest of their body. Comical.

Now each duet – or table – collapses and wraps itself in the table cloth. This yields three tube-like beings which then dance with the others. Eventually, the tube-like beings roll off stage. They return, walking onto the stage, waving the cloth as a flag, bow, and exit.