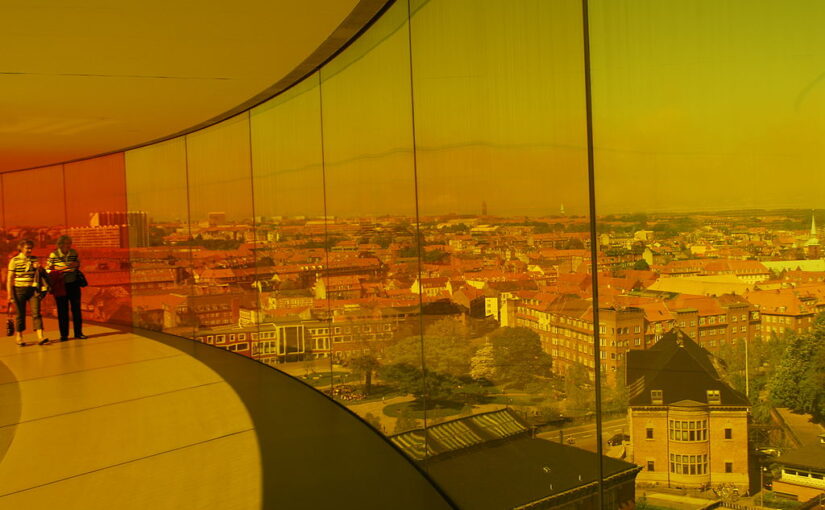 In April this year, I visited Aarhus, Denmark. One of the principle visitor attractions is the ARoS Aarhus Kunstmuseum – an art museum which has a circular walkway atop the building. Visitors can be seen walking in this circular structure as it has glass sides or walls creating a passageway. Hence, a circle dance is its product.

The designer of the rooftop structure – known as the Rainbow Pavilion – is  Olafur Eliasson and it was completed in 2011. Walking around the 150m long structure – inside it, the corridor uses glass walls of different hues which colour the view of the landscape below. I visited about 7pm on a spring evening – the heat from the setting sun was quite intense. In the sunset, a shadow was cast on the neighbouring building showing the irredentist colours of the Rainbow Pavillion.

When I visited the museum, its collection included an exhibition called Vertigo. Perhaps the most impressive of the works was an installation by artist Jeremy Shaw. His ‘Phase Shifting Index’ artwork particularly impressed me due to its construction, treatment and subject (dance, ritual, sublimation, existential crisis). Rather than explain it further, watch this short video (below) where Jeremy explains it. His artwork has been touring internationally hence this video from the Art Museum of Estonia. Strangely, none of the dancers involved in Jeremy Shaw’s work are acknowledged – not in the credits of the films, the gallery notes nor programme. Why?

There is another circular walkway in Aarhus which I visited. It’s set in a country park slightly outside the city. The 188 metre walkway is similar to the Rainbow Pavillion: it also creates a circle dance by the passage of people travelling in a circular path. But this walkway is a circular peir which is set above the sea rather than a glass corridor set in the sky. Infinity Bridge is a sculpture by Danish architect studio Gjøde & Povlsgaard Arkitekter, built and exhibited in connection with the international biennale, Sculpture by the Sea 2015. Read more about it.

Beneath the Ceiling is an artwork by Rosalind Holgate Smith. A suspended surface made from fabric and wood (300 x 380cm) is set at 1 metre ‘waist height’ which creates a space that ‘invites you to explore moving, resting and relating at ground level’. For many people this may mean crouching or crawling under the suspended surface or ceiling. The installation was shown at  GlogauAIR, Berlin in 2020.

Much like the passageways described above – at ARoS Aarhus Kunstmuseum and the Infinity Bridge, this installation guides the participant in their movement but it is more constrained in its effect. The view is more of the gallery floor and the those exploring it – it’s not in a landscape setting. It’s inside and not outside.

Rosalind’s background as a dance artist suggests that it is the movement of figures in the space and into the space which is the primary interest. The lowered ceiling invites particular movements rather than a pathway to travel.