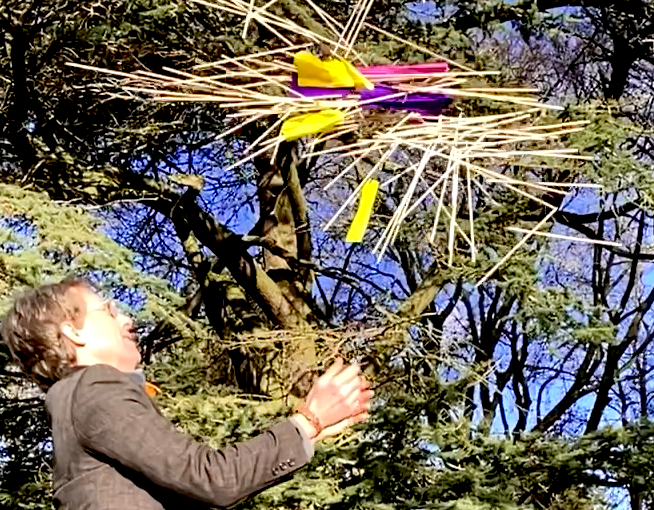 On 10 February 2022, I stood in University Parks, Oxford with 100 small sticks and paper slips between my cupped hands. Raising my hands upward, the sticks and paper were lofted into the air. As they were rising they slowed until, for a moment, they were suspended, neither rising nor falling – a cloud of sticks before me, about to scatter and return earthward in a shower.

There is a black and white photograph in the Trade Fair Palace (part of the National Gallery Prague in the Czech Republic) which shows the artist Hugo Demartini throwing a bunch of chopstick-size sticks and card into the air. It is entitled ‘Space Demonstration 1967-1968’. I had re-enacted his performance in University Parks that February day and I named it ‘Remembering Hugo Demartini, artist’. Fittingly perhaps, Demartini’s photograph is the only artwork that I recall from my visit to the Prague gallery and its collection. I am not particularly forgetful – this artwork spoke to me in a way that others did not. It is not just the image but the idea of it – the concept. I find it prophetic and very beautiful. It is so elegantly simple; there is nothing that I would change to make it better – it is perfect.

Hugo Demartini (1931-2010) was part of the so-called Czech constructivist school, and he was an advocate of neoconstructivism. Browsing through his work, you can see the resemblance of his 1950’s paintings to early twentieth century Soviet artists like Malevich.

Often Malevich’s paintings (e.g. Suprematist Composition #4, 1916) feature geometric forms – squares, lines, triangles – which are composed on a plane and rendered in paint. Demartini did something different to those abstract artists – he would use chance to arrange the items by dropping sticks, cut-out shapes and the like, onto his canvas and recording their position – using them as a template for his painting. Drawing around their outline, paint was applied to the sketched shapes. Sometimes, he would also use these fallen items in the work – attaching them directly to the canvas.

Demartini produced a range of work including low reliefs and sculptures, often situated in the landscape. He is less well-known in the West – even today there is not even a Wikipedia entry (in English) for him. A Czech TV documentary (2010) describes his life’s work and shows one of his sculptures. The sculpture fills a room with painted metal tubes suspended by barely visible cables in an open structure. The visual similarity to his stick-throwing performances is apparent. But considering these two works – the performance of throwing sticks into the air and this tubular sculpture – we may arrive at some observations and conclusions.

The tubular sculpture is monumental – you walk around it, parts of it are above head height and it is situated in an atrium or similar. In a sense, it is an installation whose parts are separated by space. Sculptures have volume and depth which is created and revealed by our movement about them. In that sense, we participate in their creation by our movement.

The photograph of Demartini throwing sticks is a representation. It is not a performance but an artefact. It shows him – a man with arms outstretched and fingers releasing the cascading sticks. The presence of a human body reminds us of the scale of the sticks and, importantly, a person is also an integral part of the work – who throws or releases the sticks. His fingers seem stick-like and his stance suggests movement with which we can empathise. It is embodied movement. It is the presence of a performer here which marks it as different to an artwork or artefact as we might say. Imagine that the performer was not shown and there were only the suspended sticks: it would be a sculpture.

I have produced dance performances using sticks, although they were actually poles 1.2 metres in length. I also tried throwing them – all five of the poles – into the air like Demartini’s Space Demonstration. But the result was very different. The scale of the poles to the person throwing them diminished the human figure. Somehow, the meaning or semiotics changed from the original. Looking at the photograph ‘Space Demonstration’, we might think of analogies to releasing the sticks into the air: releasing a bird from the clasp of hands which then takes flight, for example.

When I make the performance ‘Remembering Hugo Demartini, artist’ then I am making a kinetic sculpture. Those sticks are being sculpted by my hands and my movement. For an instant, the sticks are suspended before us – and using a camera or video recording we can study the phenomenon. The magic of a camera to show a moment in time is a critically important part of this work. It is a study of time itself. Just as paint is critical to painting then photography is critical to this product. We might also consider that the photographer is equally important in the production of the work as the artist. For my performance there was only one person in the audience – the photographer Fiona Bennett. But there could still be a performance without an audience, and a photograph without a photographer – a self-portrait for example. Furthermore, photographs produce audiences, although vicariously.

But my performance is not Demartini’s performance, and never can be. It is the temporal nature of our performances which sets them apart from sculpted artefacts (‘sculptures’) – such as the tubular sculpture I describe above. Sculptures endure. Performances do not. Maybe that is their attraction. They are alive and, like life itself, fleeting, never held and soon over.