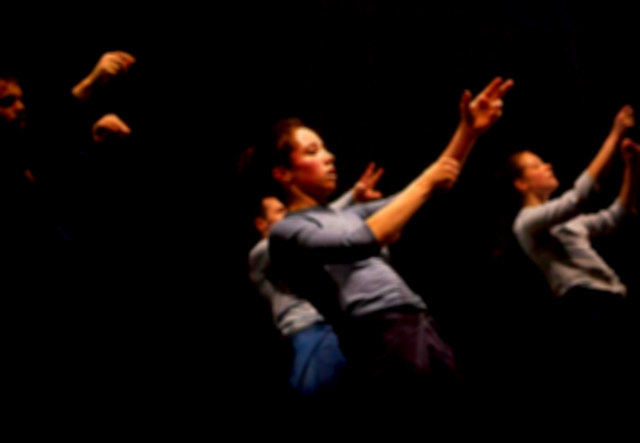 Richard Chappell had organised a three day workshop for young people prior to the performance, and the young dancers opened the show. They rolled on the floor, a receeding or enveloping carpet of bodies as standing dancers performed contemporary routines. It was very sweet. But I was surprised that of the dozen performing children, there was not a single boy in the group. The youngsters certainly brought their doting parents along – they were most of the audience.

Richard Chappell is the first of the company to dance, and he solos. His body ripples as his head is thrown back and forth. You certainly admire his physique. A solo gives way to duet and quartet. All of the other dancers Iris Borras Anglada, Francesco Migliaccio, and Sharol Mackenzie as equally capable performers. There were some beautiful flowing movements from Iris Borras Anglada starting in her hand like a classical Indian dancer and then into her limbs and body.

Another notable moment, was a ‘acro-balance’ with two dancers their limbs like a constructionist sculpture.  I also enjoyed the quartet of dancers laying on floor, their necks and backs supporting their torso with legs projecting into the air. As if standing but upside down.  There was a lot of athletic and creative interactions which kept my attention and shone through.

The stage or performance area at the Pegasus is rather small.  Nevertheless, if the stage is a canvas upon which one composes then this wasn’t a composition which used it to its full – far from it!

A number of times, I notice all the dancers glancing and looking skyward which I loved. I couldn’t decide if this was with foreboding or  longing but it was a moment and a movement which truly connected them all. There could have been more use of stationary and standing figures too. There is nothing so compelling than the standing and still human form. Overall, the dramaturgy by Neus Gil Cortes was the weakest part of the performance: a little flat and lacking in drama. More expression please!

In the after-show talk, each of the four dancers is asked for a few words which summed up the dance.

I’d say – in three words and as a reviewer: it’s still evolving.

Featured/top image: Scanned image from the flyer for ‘At the end we begin’.