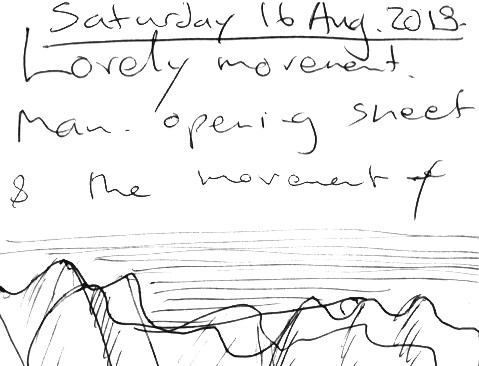 Learning to dance seems simple: attend classes; practice; dance! But learning to dance is – for me – a highly reflective and investigative practice, and integrated into making dance – just like making any artwork. In 2018, I learnt that dance is not theatre; and that decorators are dancers.

Italo Calvino is a brilliant author, and a prolific short-story writer. Could a dance be devised based on one of his stories? ‘Making Do’ is barely more than a page in length, and perfect material for a dance. In July, I read the story to dancers at a Creative Lab of Oxford Dance Forum and proposed we construct a dance score for it.

Calvino’s story ‘Making Do’ starts with these words ‘There was a town where everything was forbidden’. It goes on to say that everything is forbidden except playing the game tip-cat; laws forbidding everything else where introduced slowly – one by one – and with good reason; no one objected and all followed the laws. But one day, messengers brought word that no longer was everything to be forbidden; there was no forbidden any longer. The towns people decided to continue playing tip-cat; after-all it wasn’t forbidden and that’s what they knew. Nothing changed. Consequently, constables were called upon who decided that ‘tip-cat’ would now be outlawed and forbidden. But once the towns people heard of this change, they rebelled, killed the constables, and got back to playing tip-cat.

Once I’d read this story to the participants in the lab, I asked for their observations and suggestions: we could play the parts in the story – the townspeople, the constables, the messenger; or maybe we could dance the idea?

In ‘Making Do’ the central idea is the development of conformity, the challenge to it, and the suppression and eradication of it. While freedom maybe offered; the comfort of servitude is preferred. Changing behaviours are resisted and violently too.

I’m not sure my idea was understood – dance the idea of it: one person noted that game of tip-cat involves making strokes which is a movement, and indeed a movement which could be danced. I lead with an idea: let’s travel in parallel lines – moving up and down the dance studio – that’s conformity, and then we’ll introduced the breakdown of conformity or challenge to it – the lines break-up, and finally it’s re-established?

A few months later, I reflected that here is a – or perhaps ‘the’ – difference between dance and theatre: how actors would take the parts and use their expressive powers in these roles. But for dancers, we are movement and that movement can be an idea or an emotion, and not necessarily a figurative element. In staging literature as dance, we can move beyond role-playing. A painting may be ‘abstract’ art or ‘figurative’ or indeed, somewhere between. So it is with dance too.

Keeping a dance diary or notebook is a really important part of my artistic practice. In August, I was travelling into London on the bus from Oxford. There is an elevated section of the A40 called the Westway, and looking out of the bus window I saw a decorator outside, shaking a dust sheet or similar. The sheet of fabric opened and I could see the ripples on its surface, and there was the movement of the figure holding it too. That could be a great artifact to use in a dance; catching the wind; wrapping people; and linking them.

In September, Dance South East put out a call for proposals to dance at the Brighton Festival. That idea, for a dance with fabric from an observation on the A40 Westway became the proposal for a dance on the shoreline at Brighton with a sail.