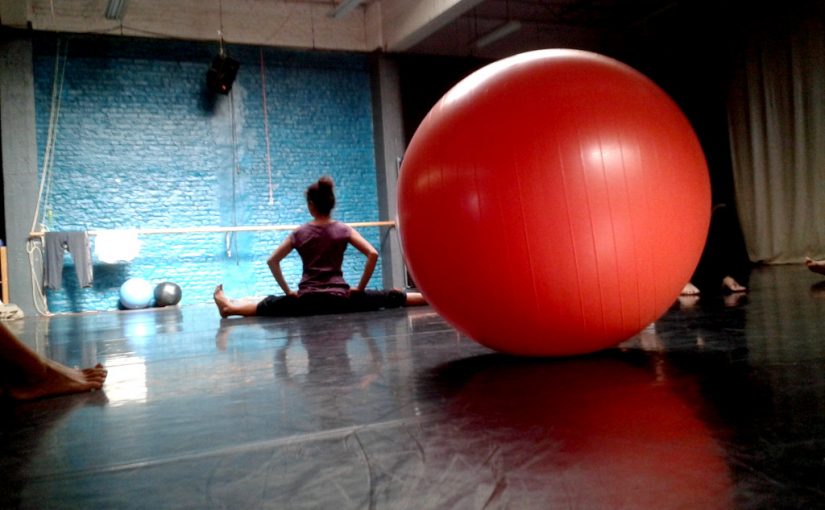 This is the second day of a five day intensive for play-fighting with teacher Bruno Caverna on Tuesday 7 August 2018. [Next day]

We stand in a circle and play a game. We are to choose two other people in the circle and stay the same distance from them. But we do not indicate who we have chosen – it’s unsaid. We move but must keep our relation to the other two people. It’s a triangular relationship and difficult to maintain if you ‘partners’ exchange places!

Bruno emphasises the distance of the other two people (length of the base line in a triangle) is being maintained rather than the ‘height’ of the triangle apex – at least I think this is what he meant.

Not surprisingly a geometric pattern soon develops which reminds me of Conway’s Game of Life and cellular division. Once we have all entered the space then we must move but maintain the rule of the maximum distance from other people while moving. It’s not easy.

Next exercise: working with a partner, one person must walk in a straight line at other who stays static, avoid collision with the moving person. The easiest response is simply to step to the side or rotate just before they strike you. Bruno doesn’t tell us the correct response but it’s not difficult workout. Do the most with least effort.

We repeat the above exercise – initially we are in a group of three and then later five people where one person is the ‘target’. As before they must avoid collisions as people walk in straight lines to them. It’s not difficult although some collisions occur but perhaps that’s the value of it: to be conditioned to collisions – overcoming fears and to normalise it? Bruno explains – keep nimble on your feet and grand gestures don’t help. Later, we repeat with five people in each group but run rather than walk at the target person. There are a few bumps but they don’t particularly hurt.

We stand in a circle and Bruno describes the exercise: there will be five people who are ‘bumpers’ and their role is to bump into people and the task which everyone is assigned, is to discover who are these five people. We are told to close our eyes and then Bruno touches five people to indicate they are the bumpers. At the end of each round, we try and guess the bumpers; and the bumpers reveal their identity.

A further round of the bumper game is played in a smaller floor space which is demarcated by sticks placed on the ground –  thus increasing the speed of interactions and bumping. I am picked as a bumper by Bruno but then told to sit out as I opened my eyes too soon in the selection procedure.

Each one of us takes turns to stand at the end of the room and to have tennis balls thrown at them – firing squad style. Bruno demonstrates that moving a little to the either side is enough to avoid the balls – little effort is required. Most of the balls would probably miss but undoubtedly the avoidance actions assist with this. It’s similar to the previous avoidance exercises but but now with tennis balls.

It’s my turn and I stand at the end of the room. My red t-shirt makes an easy target! There’s a backdrop or curtain which hides some objects and when the balls start flying then I move and stumble upon it and fall over. The ball throwing stops and I stand up. ‘Are you okay’ people say, and then they return to throwing. I don’t move much to see if I can use the minimum effort. A couple of balls bounce off my chest but the ones which I’m concerned about, might strike my face or spectacles which could injure me or be an expensive replacement. I see one ball coming to my head and turn to the side: it narrowly misses. It lands with a load thud in the backdrop – the avoidance worked! The ball throwers exclaim ‘Wow’! The throwing stops soon after.

In the feedback afterwards, people describe their thoughts and feelings. Some say they were afraid and simply ignored it anyway. Others agree but most say nothing. A couple of people say they had little or no fear.  It’s true tennis balls are relatively innocuous but I still felt a little anxious before the exercise.

No one reflects on the wider sociological significance of the game. For example, why did people agree to do this exercise? What was the point of it? I think it’s largely a test of obedience. It reminded me the Milgram experiment? I wondered if the exercise produces a survivor mentality which assists in group formation? Who benefits from that?

There is a lot of talk by Bruno in the feedback session with references to events and politics about using resistance: for example he considers that in the national liberation movements in India and South Africa then the leaders of them resisted too much. Strange but I thought it was the oppressive apatite and colonial regimes which had resisted too much! But we can’t ignore his musings – we must simply sit and listen until he finishes – whatever we think. He is the teacher, after all.

We consider bio-mechanics – how can we move with maximum efficiency? Indeed, are we even aware how how we move – patterns and sequencing. We must use two positions (A and B) and move between one and another, considering alternative sequences of movement. We study the movement possibilities by ourselves and observe our own bodies.

A person sits beside Bruno and he shows how giving touch with open hands can release and move a person from sitting to laying on their back. There appears to the observer that little is happening – no lifting or pushing; just laying on hands on the back, arm or shoulder. But it must not be faked and the person being moved, guessing what is the task. But given that we’ve previously done something similar then what are the other responses? Further – there is the weight of the torso and head to consider – they – and gravity – will cause the body to fall. We repeat this exercise but standing and bringing a person to the ground.

Finally, we jam to music.

See the next day of the Play-fight Intensive (day 3)

See the previous day of the Play-fight Intensive (day 1)

Top image/featured image: Warming-up in Hybrid Studios before the training session. There were a few large physio balls kept in the studio with which we played.