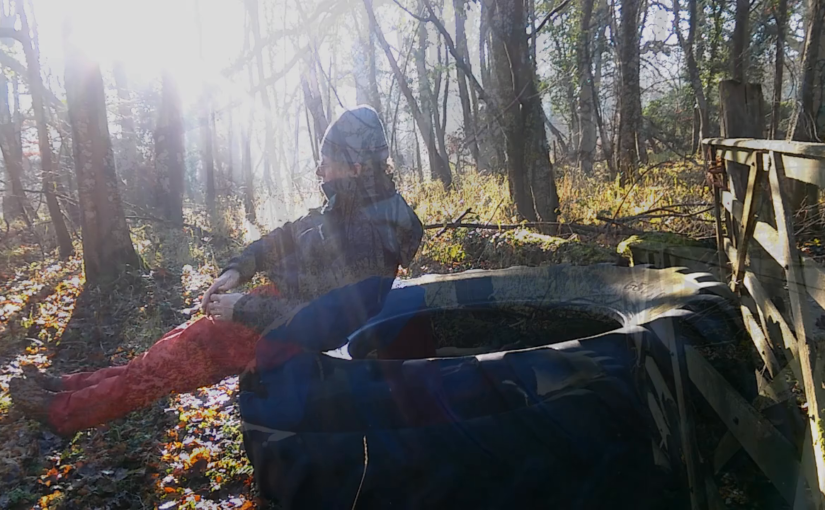 This dance was recorded on two occasions in January 2022. While this is a solo performance. It is also a duet. For I dance with the embodied memory of my previous dance. Thus the past is present: always present.

The recordings were made in woodland near Horton-Cum-Studly, Oxfordshire, UK in January 2022. The video is a composite of those dances. The setting of the dance makes a #LandscapeDance

This dance is #FoundDance as it involves dancing with found objects. But more than this – the dance is found, it is found in the objects and in the dancer. The dance is shown, revealed and found.

In the first dance, I sculpture with my body the torus shape (the tractor tyre). It’s form and volume are revealed with the physical contact of my body with its surface. Just as a sculpture reveals a figure in their sculpting, I reveal the torus in dance. Thus, it comes into existence and being with my movement with it. We call this production – for a performance is a production #Voluism It is more than the contact with its surface although this is present. The dance we know as #ContactImprovisation is now re-contextualised and situated in sculpture.

The intersection of the forms is the torus. Form: dance form; casting from void.

Visually, you’ll note the cutting to black and fading in-and-out. This is intentional. The cutting to black causes after-images/complementary colours to form. It also mirrors the aural aspects of the woodland – the passing of traffic at the performance. The presence of the medium of film and the surface – our contact with it is sensed, and made presence. The viewer becomes dancer.