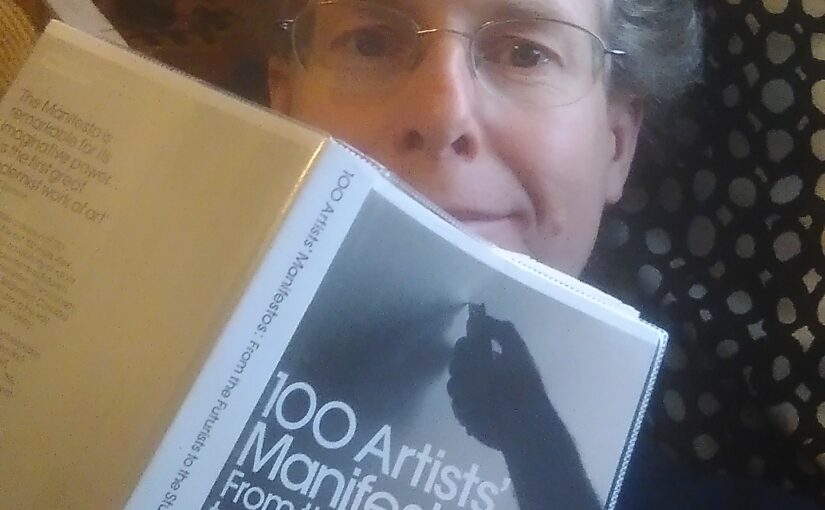 I began to research art manifestos with a view to writing one for dance. Taken together with my recent practice research for the dance ‘Torus 2.3.3’ then I came to the conclusion that dance could be re-contextualised and situated as sculpture.

There seem to be few manifestos for dance. Even a cursory search with Google Scholar suggests this (Google Scholar with ‘dance manifesto’). The few relevant results may be due to the nature of search being syntactic rather than semantic, or perhaps there really are few dance manifestos?

Dancers have another language – the language of movement and dance – with which to communicate. Maybe they don’t need volumes of written texts. If you can dance it – why write it?!

Dance doesn’t exist in a vacuum. But reading through the book “100 Artists’ Manifestos – from the Futurists to the Stuckists” by Alex Danchev (Penguin Random House UK, 2011, ISBN 978-0-141-19179-9) then I was surprised to find there was not a single manifesto by a dance artist nor for dance. But the manifestos presented in this book – which date from 1909 to 2009, exclude many significant artists and indeed some art movements – cubism or impressionism – for example. Perhaps this reflects that many artists and art movements simply didn’t write them.

The author of this manifesto collection Danchev, writes about the artist George Maciunas and his Fluxus manifesto (1963). Of the fluxists, he says:

They were strongly influenced by the teachings of John Cage … and his ideas about play of chance and indeterminacy in art. These ideas had influence across the avant-garde, through his companion and collaborator Merece Cuningham (1919 – 2009), the great dance-maker, and the artists Jasper Johns and Robert Rauschenberg‘.

But that is the only explicit reference to dance! There are manifestos by painters, sculptures, film makers, architects and indeed socio-political movements involving artists. But why so few by dance artists or ones which seemed to explicitly include dance: none – not one. Is there such a thing as ‘dance-blindness’?

Widening our definition of dance to include movement rather than ‘dance’ (embodied movement) then there are relevant manifestos in Alex Danchev’s book. If I couldn’t find dance manifestos then perhaps I could find dance in the manifestos?

The Futurists celebrated movement associated with machinery and manufactured items – cars, planes, etc. They lauded power – both physical and political, war, energy, the mechanical, electricity, conflict/struggle and all that was modern at that time. They preceded World War One and reflected an optimism about the future.

For example, ‘The Futurist Manifesto’ by F.T.Marinetti says:

4. We believe that this wonderful world has been further enriched by a new beauty; the beauty of speed. A racing car, its bonnet decked with exhaust pipes like serpents with galvanic breath … a roaring motor car, which seems to race on like a machine-gun fire, is more beautiful than the Winged Victory of Samothrace.

F.T.Marinetti, Chapter M1 (The Foundation and Manifesto of Futurism’), p5, ‘100 Artists’ Manifestos – from the Futurists to the Stuckists’ by Alex Danchev.

Other futurist manifestos include Umberto Boccioni ‘Manifesto of the Futurist Painters’ (1910) which says:

9. That movement and light destroy the materiality of bodies.

F.T.Marinetti, Chapter M2 (Manifesto of the Futurist Painters), p9, ‘100 Artists’ Manifestos – from the Futurists to the Stuckists’ by Alex Danchev.

The Realistic Manifesto (1920) by construvisits Naum Gabo and Anton Pevzner (Chapter M37, p 189) – by inclusion of nature and natural phenomenon, introduces movement outside of that by manufactured goods (‘man-made’ artefacts) and political power so beloved by futurism.

Look at a ray of sun … the stillest of still forces, it speeds more then 300 kilometres in a second … behold our starry firmament … who hears it … and yet what are our depots to those depots of the universe? What are our earthly trains to those hurrying trains of the galaxies?

Naum Gabo and Anton Pevzner, Chapter M37 (The Realistic Manifesto), p191, ‘100 Artists’ Manifestos – from the Futurists to the Stuckists’ by Alex Danchev.

Naum Gabo and Anton Pevzner outline five fundamental principles of their work and constructive technique including:

5. We renounce the thousand-year-old delusion in art and that held the static rhythms as the only elements of the plastic and pictorial arts. … We affirm in these arts a new element of the kinetic rhythms as the basic forms of our perceptions of real time

Naum Gabo and Anton Pevzner, Chapter M37 (The Realistic Manifesto), p193, ‘100 Artists’ Manifestos – from the Futurists to the Stuckists’ by Alex Danchev.

In the above, ‘plastic’ is what we might call abstract art and which is sometimes called ‘concrete’ art.

Reading Kasimir Malevich‘s ‘Supremist Manifesto’ (1916) is really a breakthrough – it reads like poetry. His text is anthropocentric – human experience (and hence embodiment) are centre stage in the lucid prose.

To create is to live, forever creating newer and newer things

While Alex Danchev introduces Malevich’s manifesto as one for painting, and there are references to painting – the manifesto is about subject and method which are applicable to many art forms including sculpture, dance, etc.

Performance was an important part of Dada – an international movement which riled against the warring of nations in the first World War. Indeed, one would almost think that they invented cabaret! Even today, the legendary Cabaret Voltaire in Zurich – almost the home of Dada is still in existence. The close relationship of Dada to the Surrealists – who bring forth the unconscious and the human psyche, is documented.

There is an extensive set of Dada manifestos in ‘100 Artists’ Manifestos’ including ones by Hugo Ball (1916), Tristan Tzra (1918), Richard Huelsenbeck (1918), and indeed a further 23 manifestos published in 1920. Dada set-out to alarm and shock using word-play, prose, poetry and written techniques including nonsense in their manifestos. Why so many manifestos for Dada? Manifestos were their art.

But since these manifestos also conceptual – we might consider them as part of the conceptual art movement. I didn’t notice performance practice or its advocacy addressed in the Dada manifestos. I found little relevant to movement or dance – although reading left to right and punctuation is movement! But a Dada manifesto may have been spoken or sung!?

The Gutai group (Gutai means concreteness or embodiment in Japanese) consisted of nineteen artists lead by its founder, who created art using materials that were typically outside of fine art materials or methodologies used in making art at that time. The Guatai manifesto was written by its founder Jirō Yoshihara.

In 1957 the first ‘Gutai Art on Stage’ performance (see photographs of performances) was a piece by Shiraga Kazuo called Ultra-Modern Sanbaso:

‘A series of painted poles topples over on an otherwise empty stage; the artist himself appears, and dances, costumed extravagantly in red; and army of Gutai rush the stage, with bows and arrows, and complete the ‘painting’ by shooting arrows in the backdrop’

Alex Danchev introduces Chapter M66, The Gutai Manifesto (1956), p331, ‘100 Artists’ Manifestos – from the Futurists to the Stuckists’ by Alex Danchev.

I was particular drawn to a description of an art work by Kazuo Shiraga who painted using his feet. What matters here, was not the production of a image but the action of using the feet with a lump of paint material. It’s the performance of painting which matters: the movement of the feet – dancing, painting, feet. The foot dances and it finds the dance; the contact with the surface and the paint creates the painting. Painting reveals the dance. Kazuo Shiraga

The Gutai manifest is beautifully written:

Jean Tinguely created performances, moving sculptures – kinetic art, and he painted too. His manifesto ‘Für Statik’ (For Statics), written in 1959 was part of a performance called ‘Concert for Seven Pictures’ in which 150,000 copies were scattered over Düsseldorf from an aircraft on 14 March 1959.

Tinguely’s manifest is short – only 10 lines, and it could be an ode to dance!

Everything moves continuously. Immobility does not exist. Don’t be subject to the influence of out-of-date concepts. Forget hours, seconds and minutes. Accept instability. Live in time. Be static – with movement … Stop painting time. Stop evoking movements and gestures. You are movement and gesture. Stop building cathedrals and pyramids which are doomed to fall into ruin. Live in the present …

This particular work of Jean Tinguely -‘For Statics’, is reminiscent of works by neo-constructivist Hugo Demartini in that, they both throw items into the air. But while the pattern of falling and fallen objects, and their spatial relations was of interest to Demartini, there’s no indication that was Tinguely’s interest. Still, it’s an arresting image: Tinguely’s leaflets suspend in the air, drifting downward onto Düsseldorf.

‘They performed the Singing Sculpture on the steps of the Stedelijk Museum in Amsterdam in 1968. This involved covering their hands in multi-coloured metalized powders, standing on a table, and singing along to Flanagan and Allen’s old standard, ‘Underneath the Arches’, sometimes for eight hours at a stretch’

Alex Danchev introduces Chapter M80, The Laws of Sculptors (1968), p379, ‘100 Artists’ Manifestos – from the Futurists to the Stuckists’ by Alex Danchev.

Gilbert and George have two short manifestos in the book 100 Artists’ Manifestos (M80 ‘The Laws of Sculptures’ (1969) and M83 ‘What our art means’ (1970)). These two manifestos are concerned with appearance, intention, demur and the like.

As performing figures – sometimes singing or still or animate – their work relates to performance and dance. The question we might ask is: are these dancers/performers the subjects of art or they the artists? Are they the sculpture or the sculptor? I contend that dancers are sculptors rather than sculptures.

When I created the Torus dance – dancing with a found object – then it occurred to me that it was the dance which was found – in a similar way to Marchel Duchamp and his found objects. Evidentially, the object was found and the dance was found. (Curiously, there is no reference to Duchamp in the book “100 Artists’ Manifestos” although he was contemporaneous with Dada, and often credited in having a central role.)

Sculpture embraces dance as it deals with volumes. Sculpture implies movement – as to understand volume, one must move. There is the idea that when we dance in contact that we’re sculpting volume. The surface reveals the volume but fundamentally the volume doesn’t exist until there is the physical experience. Sight is such a dominant sense. But touch, sensing, moving are the dominant experience in sculpting. The idea of volume and actual volume are dance.