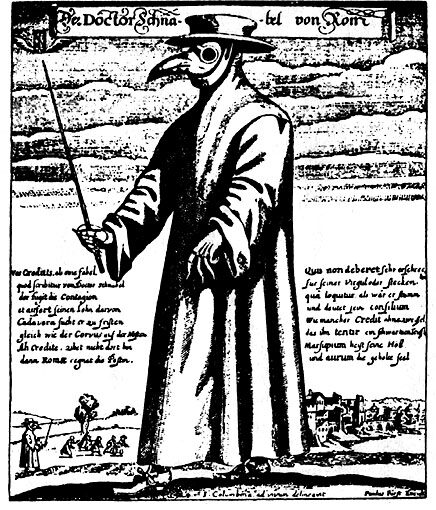 Brief for the work

In this work, I reflect on my experience of COVID-19 – which is the time that we’re all living through. Indeed, it’s said that the COVID-19 pandemic of 2020 is such a unusual event that it could be used as a marker in time: Before COVID-19, and After COVID-19.

Plague – or the Black Death – was an epidemic in Europe in the fourteenth century which is estimate to have killed 30% to 60% of Europe’s population. Plague doctors treated victims of the plague and they wore characteristic dress including a beak like mask. Thus they symbolise the presence of an epidemic and their alarming attire reminds us of it. To be attended by a plague doctor suggestions infection. The beak like mask of plague doctors were also used in Commedia dell’arte – 16th to 18th century theatre.

This is a solo work – a form which I have avoided. The nature of contact improvisation techniques favours duets, trios and ensembles. But there is one advantage of dancing solo in the time of COVID-19: if we are unable to perform together as a group due to escalation in the pandemic then the dance can continue. Indeed, with this work – a digital only distribution is a possibility which little detracts from its stage performance.

Straw is an element of nature and the landscape that we can arrange and create symbols through the movement of our bodies – think of creating a snow angel in newly fallen snow for example. Straw has a texture and it has a seasonal aspect as it’s harvested. We can look to the work of land artists like Richard Long or Robert Smithson – responsible for ‘Spiral Jetty’. There is also the possibility of using straw bails which can be used for contact and balance in dancing.

The video element of this work allows for me to solo but also duet with the video image of a dancing figure. Further, it allows the possibility of entering another world – the ‘video-ed’ world – with its magical and ethereal qualities.

While not suggesting any particular musical accompaniment in my submission, ‘Quarter Turns Over a Living Line Work’ by Raime (Last FM website) would be suitably atmospheric.

The actual description of the submission was short – only 250 words. I wrote:

This work examines our collective and personal experiences of the COVID-19 Pandemic through a solo performance using video projection on stage in-which and to-which I interact and duet. The two dancing figures are aspects of myself and ourselves – the past and the present which define our psyche and our emotional being. Threat is repeatedly hidden and manifested by musical accompaniment, lighting and symbols drawn from the natural world. A dance unfolds with the magic of illusion – through video techniques – fades, overlays, blue-screening – to confound and enchanting the audience.

The performance opens with a silhouette – a mound of straw is revealed from which a figure – me – emerges with a brush lashed to their back, sweeping and herding the straw into a form and symbol which becomes defined over the performance.

Projected on the stage backdrop is the Other World. I move into and out of the Other World where a plague doctor with a black cloak and beak-like mask beckons using a deft and lightness of movement that is ethereal and haunting (movements drawn from Qi Gong and elsewhere). A dance ensues, as capture and evasion give resistance to the contagion by touch alone.

[In the auditorium is the scent of lavender – formerly used to ward off plague.]