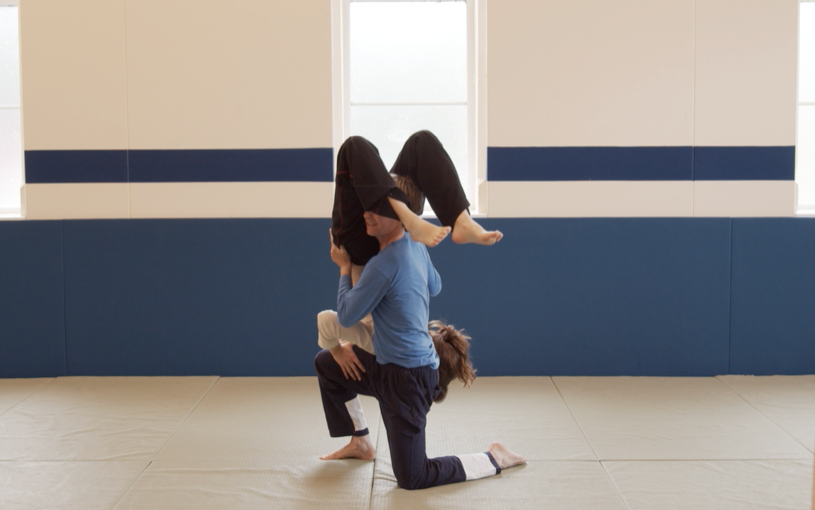 Dancer Georgica Pettus and I created movement sequences at the end of June which she set to music with ‘nonsense’ captioning. The result is ambiguous, comic and arresting. The strong graphic elements of the dance space – a dojo (martial arts hall for Aikido), combine with improvised dance practice, and leave us wondering and questioning.

Georgica and I didn’t create a score for our dancing. Initially, we listened to a song about rain once through (‘seeding’) but we didn’t perform to it. We refrained from explicitly creating a composition – instead allowing our shared practice of contact improvisation and performance to percolate through three hours of filming. There were specific techniques which we enacted and we mostly allowed the dance to progress without question. Hence, the arrangement was little discussed. The exact start or end of a sequence was created during film editing. The names of the films are the times at which we danced: look at the dojo wall and you will see a clock.

The camera we used had a low battery and needed to be plugged into the mains. The only plug was outside the door of the dojo which meant that we set it up there and the door frame was included in the shots. It created a stage left, right and to the fore, cropping our bodies as we entered and exited the camera’s field of view.

At the end of the session, Georgica and I mopped down the dojo with disinfectant as part of the infection precautions against Corona virus/Covid-19. There was no rain in the dojo but the floor was wet.

The music used for the video recordings was chosen by Georgica. It’s nonchalant and sentimental – almost hotel lobby music. But as Georgica says – it adds emotional effect (emotional colour). While dancing, there was silence but for the ambient sound in the dojo and outside of it. There was no music leading or supporting the dance at the performance, and the dancers interact in a non-verbal dialogue – dance!

Post performance, the interaction between music and dancers is understated and ambiguous. The text captioning which Georgica included, provides a narrative that relates to the dance: it’s of it but not from it.

In the films, there is an interchange between the semantics of movement and human relations but not an explanation. Incongruity. Dichotomy. We might also say, there is an textual dialogue between the performance and text presented. We inhabit the space between – suspended and waiting. Perhaps reminiscent of Dada and Surrealism techniques. The dancers presence and purpose is apparently unexplained: ‘theatre of the unexplained’.

The comic and slap-stick elements of the sequences abound – mostly falling and falling over. The interplay of the visual and captioned text expand the semiotics beyond the visual elements. Georgica’s ‘big hair’ almost seems to make her a giant in comparison to me (dancer with blue top and shorter hair). Perhaps there is not two dancers but one dancer – different persona. The textual narrative/captioning suggests that there are more than two dancers, referenced A – F. Let’s not know: how can that help us.

Every year, I hope that there will be a performance, or something more than the classes and social dancing for contact improvisation which I facilitate with Oxford Contact Dance. This year ‘Corona chaos/Covid-19′ had made it more difficult than ever. By good chance and good luck there was Georgica Pettus. Thank-you.