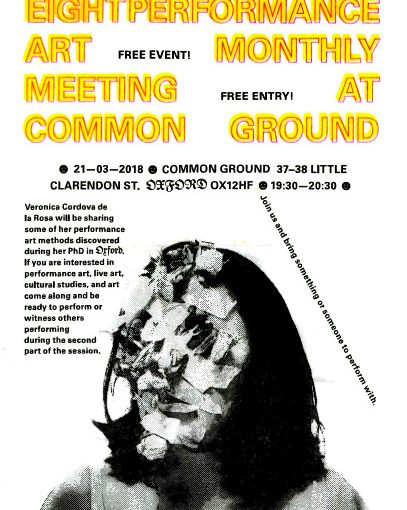 Veronica Cordova de la Rosa gave a talk entitled ‘Images of violence from Mexico : a performance based enquiry’ about her art and PhD study, on Tuesday 21 March at Common Ground – a pop-up workspace on Little Clarendon Street, Oxford. Formerly, it was a Barclays Bank and the talk was in the disused bank vault. A performance by attendees followed.

Veronica Cordova de la Rosa has completed a PhD at Oxford Brookes University where she undertook practice lead research about violence in contemporary Mexico against women. She shows slides of her research and performance work, describing her intentions.

Veronica’s work touches on the most disturbing of subjects: the abduction, mutilation and killing of  women in Mexico. Much of it is attributed to the drugs war in the country. She says that the Mexican Government has documented the disappearance of 27,000 people. It’s difficult to frame an artistic response in the face of such slaughter.

The final performance for Veronica’s PhD was entitled ‘Yes, We have names, faces and bodies’ where she read out the names of a hundred missing women, in a gallery setting.

There are perhaps a dozen people who have come to the talk and we have a performance in the bank vault which is located underground – a windowless subterranean room. Bicycles bells are distributed to those gathered, and I decide my performance will be to continuously ring the bell throughout the performance period.

One attendee – Clare Carswell – has a performance in mind. She dyes her tongue purple and illuminates it with a torch while holding a towel with a yellow and white pattern.

A pink cloth was draped from the table during the talk; now it is hung from a line strung across the bank vault. Two people – Naomi and Hugh, wrap themselves in the suspended pink cloth, becoming Giacometti-like figures. One of them holds a torch which illuminates the figure from within. They are like a glow worm – luminescent. Perhaps the vault is now more of a catacomb?

There is an absurdity to the performance especially being in a vault  which is – or has been – one of the most secured locations in Oxford.  The practice of depositing money and other valuables is now changed to one of social and artistic practice.

The featured image shown above is the flyer used to publicise the talk and performance.