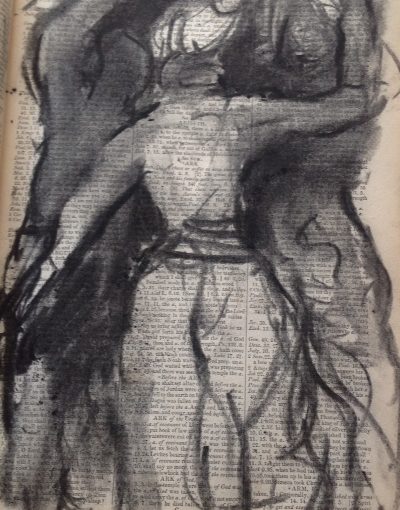 Dancers, visual artists and musicians improvised together in the Oxford Brookes Drama Studio on 11 February at a ‘Meeting Points’ session. It was organised by musician Malcolm Atkins, and revived following the death of Ana Barbour – its founder.

The Brookes Drama Studio is a small space – there’s a stage area but not a stage; it’s a practice space at best. The interior is completely black – wall, floor and ceiling. Most of those attending had known Ana Barbour but it wasn’t a memorial event. Here’s Ana’s description of Meeting Points.

Initially, the musicians improvised and we – about a dozen dancers – danced, improvising too. There was a little contact improvisation but mostly solo dancing. A couple of visual artists were shooting video, photographing or drawing. Susan Moxley rapidly draw with charcoal on book pages. Malcolm Atkins played piano and there was Bruno on cello, along with a clarinettist and others.

Malcolm suggested we use a conductor: the conductor could direct either dancers or musicians or both. He gave us the signs to use: point to someone and then to another means ‘copy them’; gesturing upwards or downwards with the hands means bigger/louder or small/quieter; then there was the ‘do something else’ sign where Malcolm waggled his spectacles and said: it’s the Eric Morcombe sign!

We switched the conduting role between people. A dancer could be asked to follow a musician, or a musician to follow a dancer for example.

Dancer Cecilia Macfarlane picked up some of the torn book pages and tore them into small squares; I tore some of the paper in strips. The sound of paper tearing became part of the musical accompaniment. Eventually, paper was thrown into the air; I scrunched up some strips and used them like a sponge to ‘wash’ dancer  Joëlle Pappas who then reciprocated. Paper bathing!

I’d never considered using paper in a dance in this way and it set me thinking about a dance around it: huge rolls of paper or something along the lines of the game scissors, paper, stone?

At the end, the black floor of the drama studio was festooned with pieces of paper, making a fascinating motif. We ended the session; I swept the paper into a pile. Could you take your broom away said Cecilia, photographing our composition.