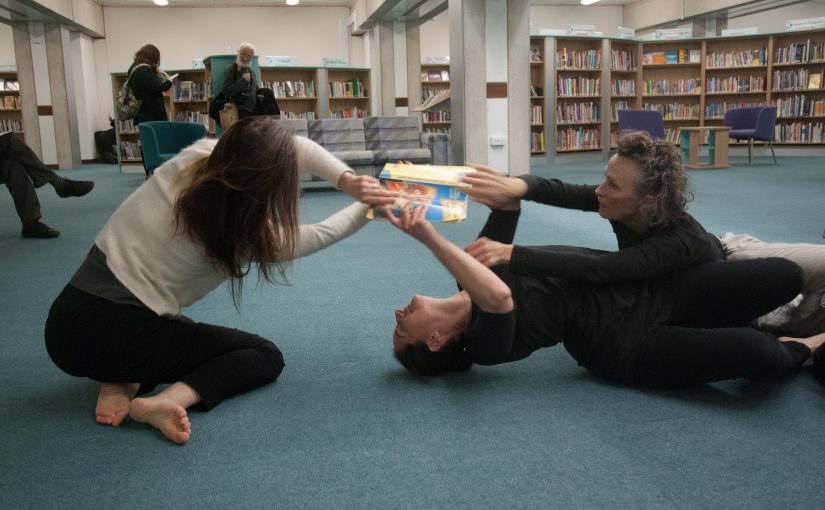 We had a fantastic time at our Library Dance on 19 December 2017 in Oxford’s Central Library at the Westgate Centre. The library had recently reopened after a long closure while the Westgate Centre was rebuilt and renovated. Our dance celebrated its reopening.

There were four dancers: Lizzy Spight, Naomi Morris, Lizie Giraudeau and me (Andrew Wood). Also supporting were: Andy Solway (timing, and book collecting) and Nicolas Leeks (video). We didn’t use any music – it was a silent dance – in keeping with a library. Beside the props of books and a chair, we also used the device of making a shushing noise which was used to indicate timing in the score – see below.

We use a score for our library dance which you can read here: Library Dance Score (PDF file). The score had three parts: firstly, we danced with books while reading them; secondly we danced with them as objects which could be manipulated and which connected us; and finally we examined the idea of moving and transporting books while also dancing with a chair too.

We  wanted to emphasise that we were dancing in contact. Therefore, the first part of the score involved solo dancing then dancing in duets, and eventually a quartet. In the second part of the score, the quartet dance together linked by books and their sharing. Finally, we work as two duets – one duet with a chair and a book which might be thought of as book readers/library users; and the other duet transporting and moving books – perhaps as a library trolley or indeed librarians.

We had created the performance at a workshop, a couple of days before.

All photos by Karl Wallendszus.

You can see Karl Wallendszus collection of photos of the Library Dance here:  https://flic.kr/s/aHskzh9mFg