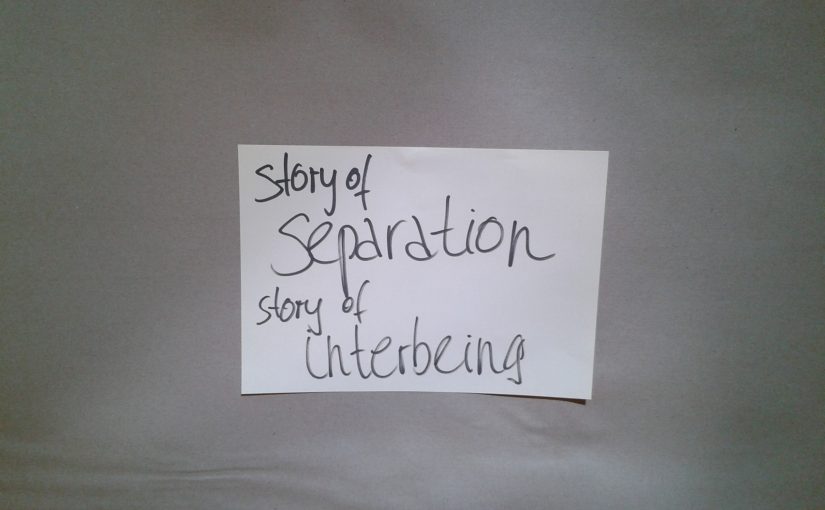 This workshop was on Wednesday 26 July; part of Contact meets Contemporary 2017.

Heike Pourian starts by reading a quote from author Arundhati Roy: “Another world is not only possible, she is on her way. On a quiet day, I can hear her breathing”. She reads it from a piece of paper which is then pined up on the wall of Studio 3. Gradually the wall becomes festooned with similar notices under three column headings: Linage [history], Present Practice, and Potential. Then there are two rows – ‘CI’ [contact improvisation] and ‘Society’ to create a grid so we might compare the two approaches. How we are in society, and how we might be – if we used contact improvisation as a template for its transformation. By chance, sunlight is brilliantly illuminating one notice which reads ‘Story of separation; story of interbeing’ as if it is shining magically. It’s not commented upon but I am captivated by it. This notice is a reference to how the pioneers of contact improvisation sought to overcome the separation of audience and performers in dancing. Ineffect, the audience and dancers are one – dancing AND spectating or watching the dancing. Thus the CI pioneers overcame separation; they re-invented dance. ‘Anarchy is our politics’ says Heike. The idea of a constitution for CI was rejected she says and pins up a notice with a quote by CI pioneer Nancy Stark-Smith ‘with these laws as our constitution [physical dance], we have no need for legislation’.

After Heike’s lecture, we break into small groups to discuss her ideas. I am with a group of perhaps five people. We are a little bedazzled by the lecture and the idea that Contact Improvisation is so powerful or potentially powerful – revolutionary! Of course, who would disagree with such sentiment at a festival for Contact Improvisation! I listen and feel slightly frustrated. I point out that here – at this festival – there is still a hierarchy and immediately someone says – hierarchy can be good!

I say that there are teachers and participants for example. ‘Yeah, and don’t forget the helpers!’ says one man. Indeed – helpers are volunteers who undertake unpaid work and take part in fewer festival activities. I don’t comment on it but perhaps there are three categories or ‘classes’ here: the teachers, the participants, and the helpers. On the other hand, no one claimed CI was a classless society! Arguably, a dance festival is not a dance session for contact improvisation (a ‘jam’) which might be more like the ideals that Heike presented and examined. It’s true that dancers in contact improvisation are less engendered in their roles than other dance forms – look at their unisex dress or the fluidity of leading and following for example … but then again when we examine a jam and see how often men and women lift their dance partners – it’s less equal than we might think.

We end the discussion by agreeing that at least we can hope that the ideals presented might be possible: that another world is possible – as Heike suggested in her opening remarks.