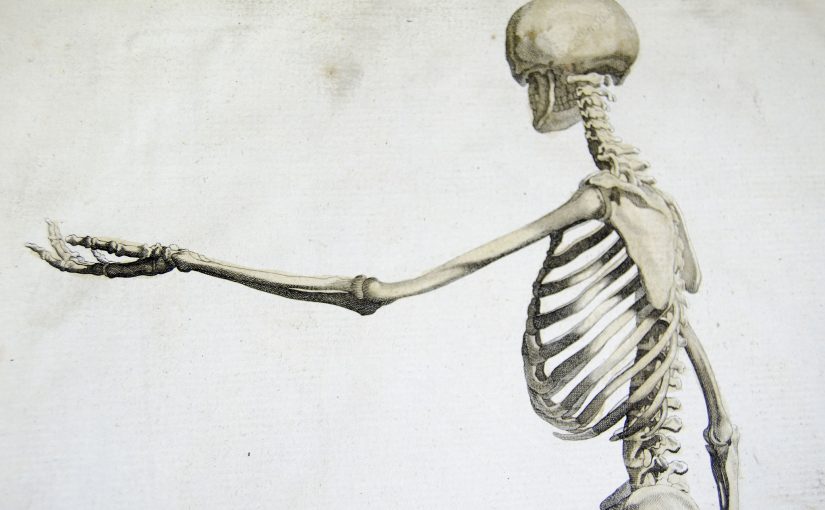 Have you seen Material for the Spine? It’s an interactive DVD-ROM devised by Steve Paxton – one of the pioneers of contact improvisation. It’s a beautifully produced resource for dancers.

It’s takes a while to view this DVD-ROM which is captivating. The first part which I watched  – under the ‘Sensation’ section took about a day, and that was only one half of the material. The production is fantastic.

For example, it uses a very clever device of filming a human body from below where the body is in contact with a sheet of glass. Bodies are seen rolling – apparently in mid-air! The directional lighting creates a chiaroscuro effect which reveals the structure of the body in great detail- both its underlying skeleton and its folds of flesh.

Other scenes with filming-from-below camera work show figures on their feet with only the feet in contact with the glass. It’s surprising to see the mobility the abdomen while the feet of the person standing remain stationary.

Steven Paxton narrates the video on this DVD-ROM and repeats ‘Material for the Spine’ so many times, it’s as if chanting a mantra especially as he has a monotonic delivery. But there are wonderful exercises for spinal movement presented. There’s spiral rolls which he calls helix rolls, crescent roles/banana rolls, and others too – all exactingly performed.

At one point, Steve Paxton bares his back and we see his scapular (shoulder bone) in motion as he demonstrates movements in his fingers, hand and arm based on akidu and tai chi – often cited influences in contact improvisation. Of course, he’s dancing; it’s a dance!

The small dance, often referenced by teachers of contact improvisation is also shown. A computer graphic is presented with a skeleton in motion – it’s undulating spine can be seen clearly. It’s rumored Steve Paxton created the small dance when he traveled to the dance studio on the subway. His feet rooted to the spot and his hand anchored to a strap suspended from the ceiling. As the subway carriage sways about, his pelvis and spine sway gently … hence the small dance. But Material for the Spine doesn’t mention this – so it remains rumor!

There is a lot of riggor in Material for the Spine. For example, there’s an exercise for the ishcia or sit bones (see definition ischial tuberosity) and the heels.  The idea of a dance of the sit bones and their orientation is not something which had ever occurred to me: pointing with the feet or hands is not uncommon in dance but with the sit bones? Great idea!

In this viewing, I watched three dances by Steve Paxton on stage – all solos using contemporary and ballet dance techniques which are wonderful.  There’s two versions of Steve Paxton’s Goldberg Variations and another dance too. He demonstrates great dexterity in his pliés – his classical dance training is apparent. In one scene, Steve is seen sat at a laptop computer and views footage of two dances – both Goldberg variations which differ by five years. He analyses his performance and the change in dancing over the period.

I’m looking forward to viewing the other part of Material for the Spine on another day.